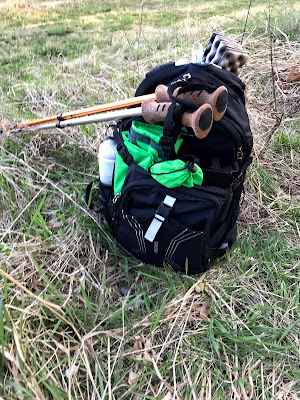 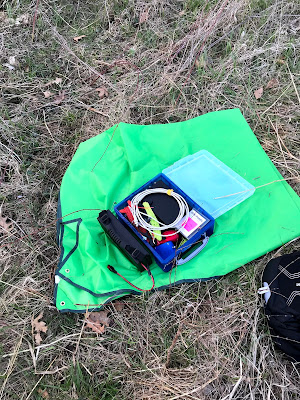 I took advantage of a break in the weather to get outdoors Thursday, March 26th, 2020.  I packed my station about 1/2 mile into Eagle Bluffs Conservation Area for a short activation.

My station was inside my pack. Ground tarp and Bioenno LiFePo battery in PortableZero case on outside.  Thermarest seat pad binered on and AT878 set up for 146.52 and APRS tracking.

Station was Yaesu FT-891 run at 50W, LDG Z11PRO2 tuner, home-brew 9:1 UNUN, Palm Mini Paddles. Had a small 5x8 clip board for logging as well as a Sony Digital Audio Recorder.  Sony ear buds - one ear in so I could not "noise pollute" and be aware of my surroundings.

The band conditions seemed to be a bit rough, but the majority of my contacts were giving me 55 or better reports.  I'll attribute that to a decent antenna, 50W, and being on a hill top.  75m was really rough but I did manage a few regional contacts.  One op thanked me for moving to 75m as he could not copy me on 40m.  I heard some DX on 20m.  I called CQ and got one station from California and that was rough.  I didn't get any others on 20m.

I wanted to make a CW contact while I was out.  So, I switched to 30m.  I heard Rich, KB1FGC calling CQ and I answered him.  He had a good signal out of Prospect, CT.  Then the QSB ate him up a bit.

Also, there was quite a bit of buzz on receive that I couldn't figure out.   Later I determined that I had bumped up the audio on the radio.  The radio output was feeding the recorder and my headphones were connected to the recorder.  I was overdriving the recorder. 🙁

The sun was setting as I wrapped up and headed home.