The QRP to the field 2018 event had a river theme going this year.  So, Ted, KC0RDM and I, Bryan, K0EMT headed to the Osage River and set up at Pikes Camp Access.  It was a chilly morning.  I was wearing multiple layers and a hat.  After noon though it warmed up into the low 60s with a chilly wind. 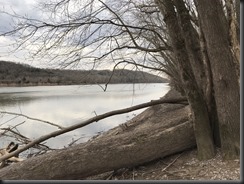 Conditions were very tough this year.  I only got three contacts.  Two with Morse code, one with SSB.  Although, I was tickled that one was with Paul, NA5N.  I was able to hear quite a few stations.  Just didn’t have much luck being heard.  QSB was so crazy, that a station could vary between 59 and barely readable within a CQ!
I set up a W3EDP antenna.  Even with a 31’ jackite pole the W3EDP takes up a lot of real estate.  If there had been campers I wouldn’t have been able to set it up. 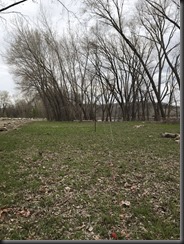 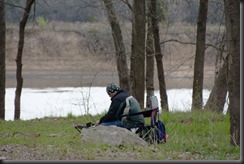 I first tried 80m CW with a 4SQRP Cricket 80a.  I could hear a few other stations, but didn’t get any replies on calling CQ.  Also, nothing showed up on the RBN. 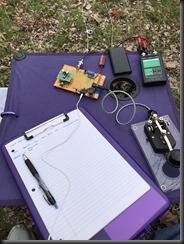 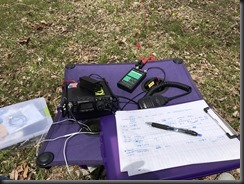 So, switched to the Yaesu FT-817 and worked 20m and 40m.  The two CW contacts were on 20m and the single phone contact was on 40m.
I still haven’t resolved how I want to take notes and log when portable.  I tried both horizontal and vertical page arrangements.
Since, we were so close to this operating location I was way over packed.  A single 5aH SLA took care of the 817 for the entire outing.  I used a 9.6V RC pack for the cricket and really had no impact on it.  It can also be used to power the 817.
Ted brought his freshly build Bitx40 and his Yaesu FT-817.  He was able to get one contact on phone. 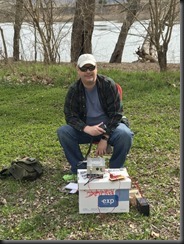 Overall, we had fun getting out into the field and exercising the gear.